A NEW BEGINNING FOR MOTORSPORT IN SCOTLAND 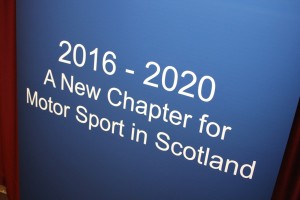 F1 legend Sir Jackie Stewart joined representatives from sportscotland, the Motor Sports Association, and the Scottish Auto Cycle Union at Ingliston on 10th May, to announce a new partnership to grow motor sport in Scotland.
Scotland has produced a procession of champions on two, three, and four wheels from motorcycling legends Jimmy Guthrie and Jock Taylor to Jim Clark, Colin McRae, and ‘The Flying Scot’ Sir Jackie himself.
This new agreement, backed by £360,000 investment over four years from sportscotland, will support the development of the sport and provide more opportunities for people from all across Scotland to get involved at every level.


The new four-year agreement has enabled Scottish Motor Sports (SMS), the umbrella body for the sport, to create two new roles, National Development Manager and National Development Officer, to deliver a new strategy.
This strategy aims to increase membership by 10 per cent.  This increase will be achieved through a focus on working with the clubs to increase the number of qualified coaches, building stronger relationships between clubs and local authorities, and developing greater opportunities for student participation.
Speaking at the launch at Ingliston today (Tuesday), sportscotland Chief Executive Stewart Harris said:
“Scotland’s success on the world stage in motorsport is unrivalled and we rightly celebrate the incredible achievements of sporting icons like Sir Jackie Stewart and emerging talent like Rory Skinner, who are here with us today.
“But success on the world stage does not happen by chance.  It requires a strong club structure, qualified coaches, an army of volunteers and above all, the opportunity to take part.
“This new partnership is about providing Scottish Motor Sport (SMS) with the resources to capitalise on the popularity of the sport and to give more people the chance to experience the excitement for themselves.
“This initiative, together with others like Susie Wolff’s Dare to Be Different programme for girls, have a big part to play in highlighting participation opportunities in motorsport in Scotland and crucially, to create more.
There is a strong club structure in Scotland and we believe that this partnership will enable SMS to harness the potential that offers, and build on Scotland’s enviable motorsport legacy.”
Three-time F1 World Champion Sir Jackie Stewart was on hand to give his backing to the new partnership and said:
“Scotland needs more champions in the world of motor sport.  To be global champions is a very big challenge.  We have to excite more people in Scotland about motor sport in general.  We have also got to encourage more people to come to racing and rally events.
“For a wee country we have done almost better than any country in the world with regards to the number of top motor racing and motor cyclists per head of population.  It would be very good for Scotland to invest more to develop more talent in motor sport.”
On behalf of Scottish Motor Sports (SMS), Chairman Tom Purves welcomed the investment:
“I am delighted to see the commitment of sportscotland to developing the sport which has brought so many world-class participants from Scotland and given Scots immense pride in their success".
A number of SACC representatives attended today and SportScotland and SMS have highlighted that priorities will be growing participation by supporting club networks, volunteers, improving coaching practise & opportunities for students. Rory Bryant has been a key player in this and has been appointed as National Development Manager we wish him every success in this role.