the last round will be the Kames Autotest on Sun. 31st October, which I am sure will be a fitting finale to the 2021 Championship which at one point did not look like it would be possible. As well as the Scottish Championship counter, Gordon Clendinning has organised a Maximum Attack MX5 Challenge, which already has a good entry, even if you are not competing it would be worth the trip to see some of these drivers in action.

The Championship will be decided on the drivers best 4 scores from 7 and as Gordon has scored Maximum points on each round he can not be caught on 128 points, bit it is still undecided who will be runner up as counting their 4 best scores, the current standings are Gary Clark on 115 points, James Morrison on 116 points and Paul Davidson on 117 points, so its all to play for on the final event. 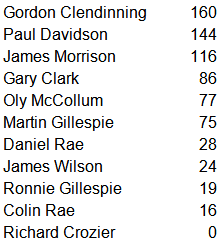 See you at Kames.